Laura Vosika teaches harp, flute, clarinet, saxophone, trumpet, and trombone. She began organ lessons at the age of 7, and trombone at the age of 11. From there, she steadily added multiple instruments to her repertoire. She holds a B.A. Music from Lawrence University, and an M.S. Education from Old Dominion University.

She has enjoyed more than thirty years playing, teaching, and performing on multiple instruments, ranging from dockside solo performances on fife for the arrival of tall ship recreations, to playing trombone for ballets, musical theater, and oratorios, to playing harp for art shows and banquets, to recording with a big band, to playing on the dockside during the historic departure of the USS Missouri from Bremerton, WA to Hawaii.

Past experiences include founding and directing a school band, and serving as a regular member of the Buz Whiteley Big Band (Poulsbo, WA), the Farragut Brass Band (Bremerton, WA) playing for navy ship departures and arrivals, and principal trombonist of the Sammamish Symphony (Issaquah, WA). Laura has loved the worlds that music has opened up, and the people and experiences it has led to, and loves the chance to bring that joy to students of all ages. She joined Kramer’s School of Music in 2015. 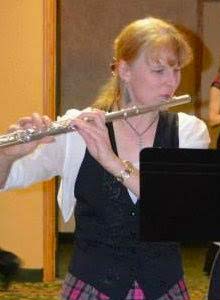